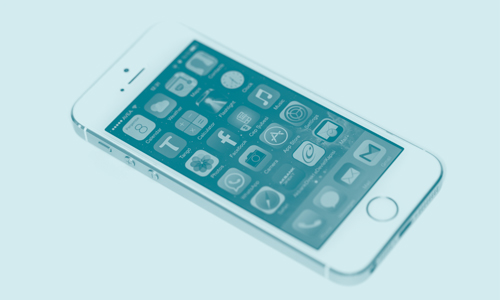 Technology’s enriched our lives in so many ways

It’s made things a lot faster, for starters. Open up Uber, and the cab’s with you in two minutes. Launch Deliveroo, and the chow mein’s there in ten.

It’s made everything more personalised too. Spotify sees you like folk metal, so it makes you a playlist. Netflix notices that you watch a lot of romantic comedies featuring time travel, so it shows you where you can watch more.

Technology’s turned everything into a conversation. You can ask your speaker what the weather’s like in Addis Ababa (spoiler alert: hot). You can even ask your phone to beatbox – and it will. Everything’s a lot less formal and a lot more fun. 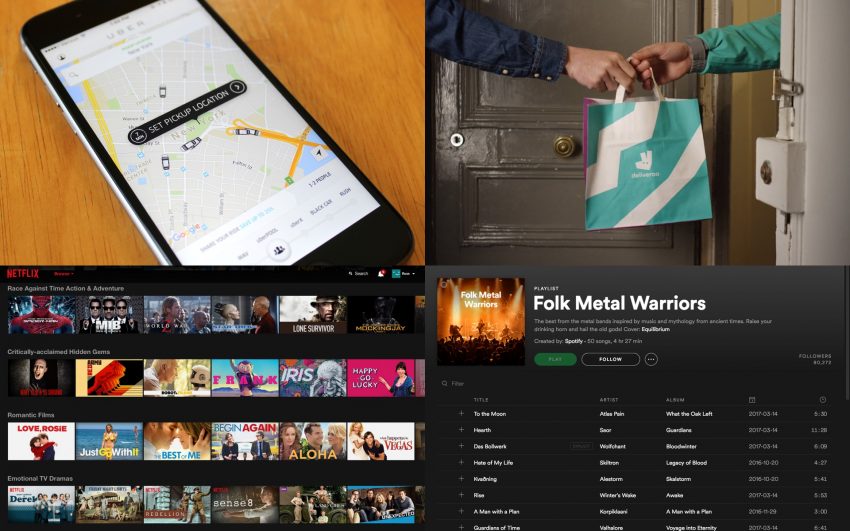 But technology isn’t everything.

Take Noom, for instance. It’s a popular weight loss app, and one of the biggest apps in the world to turn to artificial intelligence.

The app logs what you eat and how much you exercise, and gives you targeted personalised suggestions – well done for eating nectarines, lay off the fudge, and so on.

What’s really interesting about Noom is that, in May this year, they ditched the programmes that just used AI, and opted instead for a hybrid approach, adding live interaction with a real-life human coach. They found that no algorithm could beat the live coach for understanding people and knowing what would motivate them. The results from the new hybrid programmes were three times better than AI alone.

You can do it by thinking like a human, and talking like a human. It’s this kind of thinking that’s making start-ups in finance and insurance look really appealing to consumers used to the kind of experiences they get with Uber, Deliveroo, Netflix and Spotify.

What are they getting right? Well, first, they keep things simple. Look at this page from insuretech innovator Trov:

Its clean layout and brutally concise copy sends out the message that the experience you get as a customer will be just as easy and elegant.

How about this page from Jetty?

I’ve sat in compliance meetings with lots of insurers. This page wouldn’t last five minutes. Someone would quibble about the word ‘things’. Someone else would argue that not all customers can afford a Cartier, and ask us to change it to ‘wrist-based timepiece’. A third person would produce a long list of scenarios in which we wouldn’t reimburse you. Many argue that regulation makes these caveats and qualifications a fact of life. But the start-ups have the same regulator the established players have, so it must be possible. It’s a question of mindset.

The second thing start-ups do well is get rid of jargon. Some established players argue it comes with the territory. Others claim to be getting rid of it, then use a phrase like ‘managed disaccumulation’ in the next breath. Start-ups just do it. If consumers call something a price, they call it a price.

What’s interesting about this page is not the fact that Jetty’s avoiding jargon, it’s the fact they’re making such a big deal of doing it. They’re attacking the industry where they think it’s weak, and making a virtue out of being different.

It’s the same when it comes to transparency. Start-ups know people think the way financial services business work is a bit shady. So, they make a virtue of opening all that up. I love this explanation from Atom Bank: 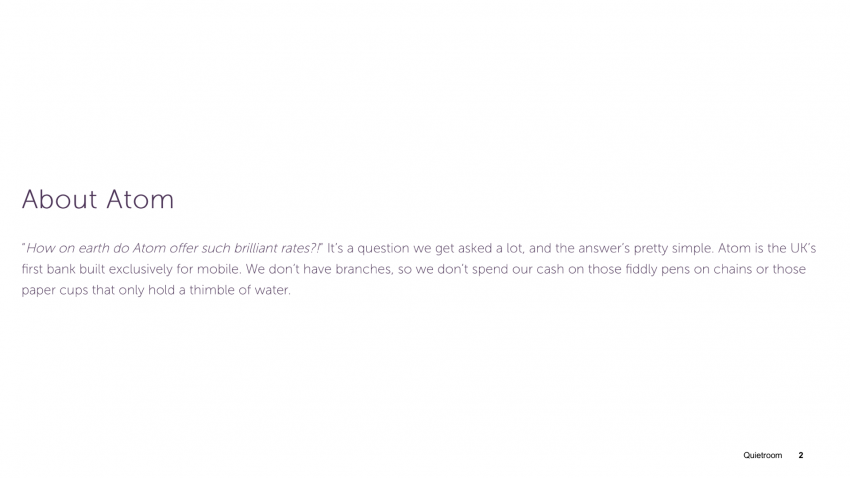 We offer better rates, because we don’t have branches. It’s crystal clear. It’s also funny. The observational detail about fiddly pens on chains uses a technique a stand-up comedian might deploy – noticing something absurd, and poking fun at it. It sends out a message that we’re on the same side: outsiders, looking in, deciding that the way banks operate is a bit silly.

This is a classic ‘challenger brand’ mindset. Challenger brands are insurgents, rebelling against the industry on behalf of the customer. They’re on a mission to fix it, so it works better for you.

Lemonade looked at the traditional insurance model, and reversed it. They treat the premiums you pay as if it’s your money. They give to causes you care about. They illustrate this with pictures of pizza, which you and everybody else on planet Earth loves.

Their copy, like all the examples we’ve looked it, is all about taking a broken system and putting something better in its place.

Even if you’re an established player, you can still talk like a start-up

If you do, you’ll be better placed to defend yourself against their competitive threat.

We work with high street bank TSB. They were formed when the government told Lloyds Banking Group it needed to hive off 631 branches to form a new bank. They gave the new bank an old name – the Trustee Savings Bank – to reflect the fact that they were reconnecting banking with its roots. It was an interesting experience for the Lloyds staff who moved across to TSB. On Friday, they were part of the problem; on Monday, part of the solution. TSB’s mission is to bring more competition to UK banking. They know that to do that, they must disrupt the status quo. They can only do that by doing things differently. It’s written into their business model, and championed right from the top. They cannot behave like other big banks. And they can’t talk like them, not to their customers, and not to each other.

Yes, they’ve got great technology. But that’s not what makes them appealing. What matters is what that technology enables: a real human connection. By thinking like a human, and talking like a human, they’re getting closer to their customers. They’ve hit all the targets they set themselves at launch. And this year, TSB became Britain’s most recommended bank.

This is an edited version of the speech Rhys gave to insurers and intermediaries at the Protection Review Annual Conference in London on 19 July 2017.

Some extra light reading (and viewing)