Why work so hard on a down-to-earth and accessible tone of voice just to stick to stale small print?

Over the last few years there’s been a rise in ‘every man and his dog’ investing businesses. The likes of Nutmeg and Moneybox are making investing accessible and understandable for a wider audience beyond the financially confident.

And these businesses are doing so well because they’ve answered a call from a growing demographic. Young digitally-savvy metropolitan savers who face rising prices in housing, living expenses and travel, and so want their money to work harder for them.

Nutmeg and Moneybox stand out from the clutter of other personal finance services by using a straight-forward, no nonsense tone of voice on their tube adverts and social media campaigns to explain how people can save and make money using their apps.

So why oh why are we still seeing ‘Capital at risk’ tagged on the end of their crisp headlines? Why work so hard on a down-to-earth and accessible tone of voice just to stick to stale small print? Some argue that ‘capital at risk’ isn’t a tough concept to understand and I can already hear the compliance teams cry, “we have to say it!”

Sure – you might think it’s straightforward but does everybody? And yes, we have to be upfront about investment risk, but is ‘capital at risk’ the most upfront we could be? 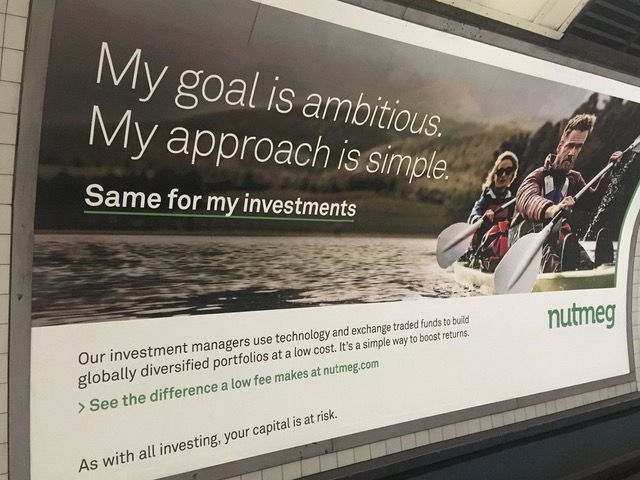 Here’s why ‘Capital at risk’ needs a rethink

What is ‘capital’? Can I touch it? Instead of using the word ‘money’ which creates a clear image in your head of what we’re talking about, ‘capital’ leaves you feeling like it’s something alien to you.

What is ‘risk’? How exactly is my capital ‘at risk’? Because we don’t explain the risk, it feels big and scary. Grounding it in the real world would make it more manageable and understandable.

It’s not how you speak

Has anyone ever said, “I can’t believe I left my capital on the bus”? Writing 101: write like you speak. If you wouldn’t say it out loud, don’t write it down.

So what could we say instead?

Your money is at risk

We’ve swapped ‘capital’ for ‘money’. So that’s a great start, but how about:

Your investments can grow and shrink

We’ve made investing personal to the reader and named what the risk is. Or even better:

When you invest, your money can go up and down

We’ve made investing personal to the reader, swapped ‘capital’ for ‘money’ and named the risk – and it’s writing like you speak.

But this isn’t just about ‘Capital at risk’

Although we’re seeing more businesses embracing a more human way of speaking, it seems small print gets left behind. So there needs to be an overhaul of how we write small print. From pensions to insurance, mortgages to investment, we’re still seeing complicated language used in the most important of places. In customer declarations, product terms and conditions, and even in customer service scripts.

It’s often at these key steps in the customer journey where stale small print lies. And it’s dangerous. Because at a time when someone needs clear and direct information to make a decision, confusing jargon can leave them feeling overwhelmed or embarrassed. This means they could agree to something they don’t understand or turn down a service that could help them.

Maybe your small print is ruled by compliance and legal teams, or the “that’s what we’ve always said” mantra is ringing in your ears. Either way, it doesn’t make investing and managing personal finances any easier or clearer for the customer. And we owe them more.