Lockdown’s limitations can inspire us to be more inventive 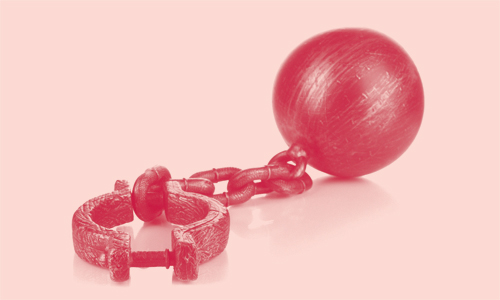 We’re all working under new constraints. Let’s use them as a catalyst to be creative.

Creativity flourishes under constraints. If you’re a painter, the edges of your canvas are your friend. If you write haiku, the number of lines and syllables you’re allowed help rather than hinder.

I think it’s something to do with what behavioural scientists call ‘decision paralysis’. We get fatigued by too much freedom. Spoilt by infinite choice. Taking options off the table unburdens you from some of this cognitive load. It liberates your brain. The tighter the brief, the freer you feel.

But there’s more to it than that. Creativity is about play as much as it is about anything. That’s one of the reasons why children are so good at it. If you watch children at play, you’ll see that there are always restrictions. Can you pin the tail on the donkey blindfold? Can you win a race with your legs tied together? Can you kick a football so it bounces off the crossbar? Without restrictions, there’s no challenge. And with no challenge, there’s no fun.

All this talk of fun leads me beautifully into what I want to talk to you about: the global pandemic that’s threatening the wellbeing of the whole human race.

It’s fair to say that it’s come with its challenges, this pandemic. We’re worried for our lives and our livelihoods. We’re concerned for our friends and families, our neighbours and colleagues, and for the future of the economy. We don’t know how bad things are going to get, or how or when it’s going to end.

That’s before I even get into the lack of televised sport.

But this lockdown also brings opportunities. When we can’t turn to our tried-and-tested methods, we have to try and test something else.

We’ve been working with workplace pension scheme Nest since the start of the year. We were due to run a workshop for them on April 1st this year, as the centrepiece of a bigger project looking at the brand. It seemed like an awesome idea in January when we set the date. But in February, as Covid-19 took hold, our workshop began to look suspiciously like a ‘mass gathering’. By early March, it was toast. The cold, dry, unbuttered kind.

We had to think fast. Nobody wanted to delay the project, or lose this opportunity to consult Nest people on the brand’s future. But one simple fact couldn’t be ignored. The office was out of bounds.

So we started exploring alternatives. We talked about doing a webinar. This was back when webinars were still cool. We talked about running some sort of activity for our participants – maybe getting them to write something, or record some audio or video for us. We thought about setting up an online community.

We pitched something we’d never done before: a week-long virtual festival, where our participants came together to celebrate how good they can be when they get things really right. It all happened over seven days on Microsoft Teams. Each day, we uploaded a video, filmed on our phones, introducing a 15-minute task for people to complete. We asked people to tell us stories about what made them proud of Nest. We split them into groups to discuss the needs of different audiences. We ran low-key calls to hear the views of people who were less comfortable posting them publicly. We asked people to take pictures of objects around their house and tell us why they were a good metaphor for Nest. People sent us postcards from an imaginary future, telling us what they hoped Nest might achieve by 2060. Over a weekend, we asked people to talk to their friends and family about pensions and retirement. People sent out messages to group chats on WhatsApp. The chief executive interviewed her husband on camera.

The workshop would have been good. But it would not have been this good.

More than a hundred people took part. The levels of engagement and participation were amazing. Speaking personally, it’s one of my favourite pieces of work ever: because of the amount of thinking it’s stimulated, the great ideas it’s generated, the positive vibes we’ve all felt being involved in it, but ultimately, because we arrived at this approach in adversity.

There is no way on earth we would have done it like this had we not been locked down on March 23rd. Yet now, I find it hard to imagine going back to trying to get the same results in a two-hour workshop. That’s what this has been about for me – using lockdown to come up with something better.

That’s what we’re all doing at the moment, isn’t it? Every day, we’re finding new ways to work together, new ways to connect with each other and new ways to get our work done. Our challenge when we’re out the other side will be to keep the best bits, and resist the temptation to default back to the status quo.

Instead of trying to think of something similar (we were going to do a face-to-face workshop, so let’s do an online workshop!), why not try to keep the fundamentals but change everything else? Think about the difference between Delia Smith and Jamie Oliver. They both cook food on TV and write recipe books. But everything else about them is different.  Delia’s a woman, Jamie’s a man. Delia has brown hair, Jamie is blond. Delia is buttoned-down, Jamie is loose. In just the same way, Jamie is different from Nigella, and Nigella is different from the Hairy Bikers, and the Hairy Bikers are…I’ll stop there.

2. Steal stuff that’s worked in other contexts and apply it in this one

We’d done the online-community-working-together-over-a-week thing two years previously for a health insurer. We recruited consumers on Facebook and asked them to explore how they felt about healthcare and private medical insurance. We learned stuff doing that which gave us the confidence to try it again, this time from our back bedrooms.  This kind of thing happens in TV and film all the time. Snakes on a plane. Dinosaurs on a spaceship. Badgers in a caravan. OK, I made that last one up.

Writers Chip and Dan Heath talk about this in Made To Stick, a book which I never miss an opportunity to plug. They talk about the analogy at the heart of Disneyland: it’s a show. The people who work there – even the ones who mop the restrooms – are called cast members. That changes how they think about their jobs and their customers. In the same way calling Nest Brand Week a ‘virtual festival’ made us think totally differently about how to run it. It changed the tone. It changed what the activities were and how we set them up. And it changed the way people at Nest behaved too. We even suggested calling the whole thing Nestival, or Nestonbury, before our client rightly pointed out that puns and pandemics do not go together.

7 tips for keeping your team together – and remote

How to talk to pension scheme members in a downturn