How to film yourself on a mobile phone

We’ve been working with financial advisers – helping them have meaningful conversations with their clients through the power of Zoom (and its less excitingly named siblings). We’ve learnt loads along the way. Here are some of those things. The principles that drive all of them are:

Above all, people need to meet you, not just evaluate your skill set, and they need to know that you’re interested in them.

Read on below or, if you prefer, download the PDF 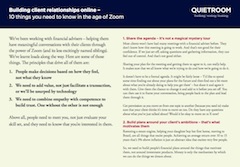 Most clients won’t have had many meetings with a financial adviser before. They don’t know how this meeting is going to work. And that’s not good for their confidence. If we just set off, asking questions and gathering information, they can feel out of control. And that’s not good either.

Sharing your plan for the meeting and getting them to agree to it, can really help. It makes sure that we all know what we’re trying to do and how we’re going to do it.

It doesn’t have to be a formal agenda. It might be fairly loose – ‘I’d like to spend some time finding out about your plans for the future and then find out a bit more about what you’re already doing to help you get there’ – but share it and agree it with them. Give them the chance to change it and add to it before you set off. You can then use it to frame your conversation, bring people back to the plan and lead them through it.

Get permission: as you move on from one topic to another (because you need to) make sure that your client thinks it’s time to move on too. Do they have any questions about what you’ve just talked about? Would it be okay to move on to X now?

Restoring a steam engine, helping your daughter buy her first home, moving to Brazil, are all things that excite people. Achieving an average return over 10 to 15 years that’s 3% above inflation is just an abstract idea that excites very few people.

So, we need to build people’s financial plans around the things that motivate them, not around investment products. Money is only the mechanism by which we can do the things we dream about.

And this applies to any meeting with a client – what’s keeping them awake at night? What do they want to be doing differently in 5 years’ time? Let’s talk more about them and what they care about and less about us and our range of exciting products and services.

Asking open questions hands the ball to your client and lets them run with it. It means they get to talk about what’s on their mind and what matters to them. You can then explore their answers with more questions – ‘You say you don’t want to be working as much as you are now. How much would you like to be working?’ These second and third questions are where the real value is. Rather than just moving on, you start to explore the details of what they’ve told you. ‘And if you’re not working, what will you be doing?’

This isn’t an interview or a negotiation. You’re both working together to collect all the information you need to put a good financial plan in place. If you imagine sitting next to your client rather than across from them, it can massively change the way you start to communicate.

We send lots of messages that show we’re listening, both verbal and non-verbal. When we’re not in the same room, some of these messages get lost. A really simple way of showing how much attention we’ve been paying, is to play back what people have just said and to sum up several things they’ve said over the course of a conversation. This isn’t just about checking we’ve got our facts straight, it’s about demonstrating our interest in that person and our desire to understand them.

To make this really resonate with people, try to use the actual words they used rather than paraphrase them. If someone says they’re ‘excited’ about retiring or want to ‘streamline’ their life, then those words played back will be much more powerful than if we talk about them ‘looking forward’ to retiring or ‘simplifying’ their life. These words are also the perfect candidates for your open questions – ‘What’s prompted you to want to streamline your life?’

And meetings aren’t a memory test. If keeping some notes would make it easier to remember important words and ideas, write them down. Just don’t pretend to your client that you’re not. Telling your client what you’re doing (and why!) is all part of sharing the agenda and working together to get the best result.

When we’re trying to prove our competence, it can be tempting to try and impress people with how clever we are. But it’s much more effective to make them feel clever. You can do this by using vivid metaphors, compelling stories and simple explanations that unlock tricky concepts. These not only build people’s confidence in themselves and in you, they also give them things to share with others. They can repeat what you’ve told them to their friend down the pub whose own adviser left them feeling bamboozled.

When you’re the one leading the meeting, there’s a real danger that you reflect this in the pronouns you use. You start talking about ‘what I need’ and ‘what I’m going to do’.  You can build a stronger relationship by using ‘we’ instead. This word automatically points to you and your client at the same time and makes you a team.

Jargon is words that are specific to a group – words that only that group understands. Using jargon can save time and reminds people in the group that they belong together. But for people who don’t belong to that group, jargon is a reminder that these jargon-speakers belong to a different group. And that makes building trust more difficult. Jargon also leaves people confused and often feeling stupid – blaming themselves for not knowing what things mean.

So, avoid jargon whenever possible. Often we don’t need it – we don’t need to talk about ‘decumulation’, we could just talk about ‘using the money you’ve built up in your pension pot’. Yes, it’ll take a few seconds longer, but it will save time in the long run because it won’t lead to the question, ‘What do you mean by decumulation?’ If you need to use a piece of jargon, make sure you open it up as soon as you’ve used it – ‘This diversifies your investment, so you’re investing in lots of different things.’

‘Seaside’ and ‘coastal regional’ mean pretty much the same thing. But if you run a ‘coach trip to the seaside’, you’ll get more takers than if you organise an ‘excursion to a coastal region’. This is because, when we learn a word, we attach memories and experiences to it. When we hear that word again, it resonates with us because of the context in which we’ve heard and used it. In the world of finance, great words like ‘help’ and ‘make sure’ are often replaced with functional words like ‘assist’ and ‘ensure’. We think they sound more professional, but they’re just weaker. Nobody ever went home to ‘ensure’ they turned the gas off.

Meaningful words pull people towards us, formal words keep them at arm’s length. Unsurprisingly, if you choose the words that you’d use if you were talking to someone close to you, you pull your client closer. And research suggests that the more educated someone is, the more they prefer these short, personal words to the long, formal ones.

Some words make a task feel onerous. Other words make the same task feel easy. Lots of people will struggle to ‘decide what is right’ but would be able to ‘choose what they prefer’. If we use words like ‘prepare’ and ‘evaluate’ and ‘ascertain’, when talking about financial planning, we can make it feel beyond people’s ability. If we talk about ‘choosing’ and ‘looking at’ and ‘comparing’, we make it feel doable. And when something feels doable, people do it better than when they think it’s beyond them.

This isn’t about dumbing down the decision itself, it’s about framing it in a way that makes it feel achievable.

Lots of people are getting their message across simply, quickly and cheaply by just filming themselves talking at home, using their phone camera. Sometimes these films look great. And other times…

Here’s how to get it right. Download the PDF. 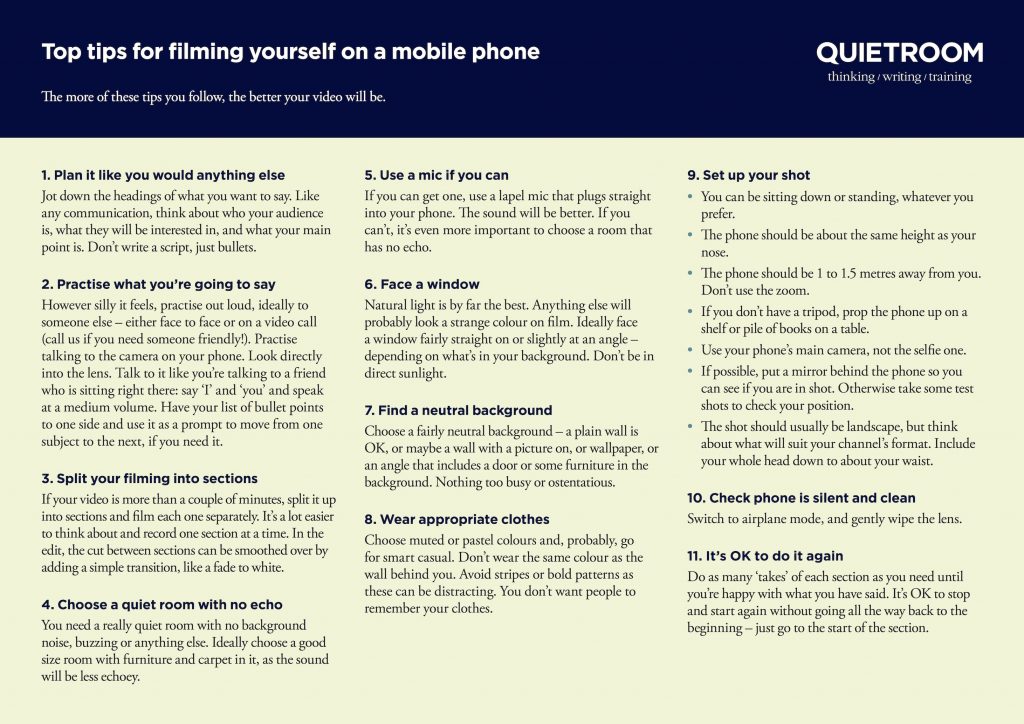 Watch some of our videos explaining tricky topics:

What we do
Clients
Team
Videos
Blog
Get in touch